A few months ago, Andy and I had the privilege of meeting and hearing celebrity entrepreneur Kathy Ireland speak at a Catalyst for Thought SYNC event. The event was officially titled, “What Problems are you Solving,” with some wonderful discussion points for entrepreneurs including:

During the event Kathy spoke about growing her world-wide brand while she was growing her family here in Santa Barbara, and moderators Jeff Bochsler and Allison Trowbridge asked some great questions about her multi-billion dollar empire, kathy ireland World Wide. 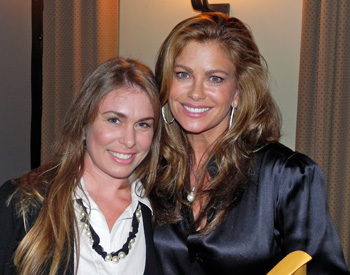 Not only was it totally inspiring to hear her journey from newspaper delivery girl (a first in the 805 area) to supermodel, turned entrepreneur, turned business mogul, but to know that she is also a living and breathing example of a balanced woman who puts her faith, family and business in the proper priorities.

Not one moment went by during the event where Kathy, a Santa Barbara native since she was three years-old, spoke without the utmost integrity and sincerity. Two qualities that rarely get connected with business empire owners or celebrity entrepreneurs.

Attending the event and meeting Kathy Ireland was a long-overdue dream. My mom, Judy Sims, actually taught Kathy in second grade at Monte Vista Elementary School, where a few years later my brother and I attended as well, so I’ve always looked forward to meeting her someday here in Santa Barbara (and wouldn’t you know it, Kathy remembers and had just seen my mom recently at a different event). And, thanks to Chrissy Deferville and her team-based local non-profit entrepreneurial group that’s near and dear to my heart, that hopeful dream finally came true.

In early 2009 I joined Chrissy, the original founder, and the initial Catalyst for Thought team as their first-ever Marketing Director and enjoyed nearly two years of growth and development with volunteering at the helm until our agency needed all of my time and I stepped down. During that entire time period and beyond, I had been hearing Chrissy talk about getting Kathy Ireland as a speaker someday – and low and behold nearly three years later it happened. Thanks to all those who helped make that fantastic event possible!

Everyone in attendance was grateful that this famous local legend came out to share her life’s journey and just how she was able to reach for the stars and land on the moon.

Amber Sims Hinterplattner, founder of the creative agency All Stages Marketing, is a social media pioneer and strategist for business branding and consumer engagement online. She is passionate about helping both start-up companies as well as mature businesses target key markets and influencers through strategic online positioning for growth and brand equity development. Amber has nearly 20 years of professional experience from a range of different industries, including working with an NBA team, best-selling authors, fitness and action sport innovators, and a luxury European jewelry company—just to name a few. She holds a B.A. in Marketing and Communications from the School of Management at California Lutheran University, and is a past President of the American Marketing Association, CLU Chapter. In 2011, she was chosen as one of the region’s 40 Under 40 business leaders by the Pacific Coast Business Times, and serves as an Adjunct Professor at Santa Barbara City College, with coursework for the Public Relations and Entrepreneurship Training Certificate Programs.

Look at What we Offer!